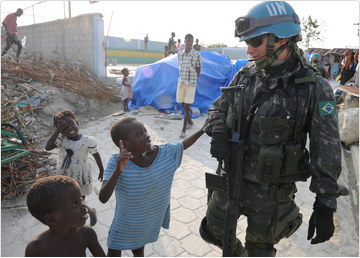 The rapid increase in the accessibility of firearms and ammunition represents a key factor in the destabilization of many countries. It is also commonly associated with an escalation in the intensity and organization of collective and interpersonal violence. In some cases, arms are illegally transferred from one state to another, while in others weapons are diverted from existing stores. In this article the authors consider the leakage from military and civilian markets as an important source of ammunition available to civilians in Haiti. We employ a unique section-quarterly panel of ammunition prices over the period July 2004-July 2012. This data is combined with publicly available monthly data on authorized ammunition shipments to the country registered by the United Nations (UN) and Haitian National Police (HNP). We also consider annual data on homicide rates and UN resolutions related to Haitian military personnel and civilian police. We use a standard time-series OLS model to show that the exogenous shocks of UN- and HNP-ordered ammunition exert measurable downward pressure on civilian ammunition markets, which we calculate in terms of adjusted predictions and partial elasticities of demand. These effects constitute solid econometric evidence that the firewall that should in theory separate military and civilian markets in Haiti has partially broken down. We conclude with a suggestion for using this model to help estimate the specific size of the leakage.