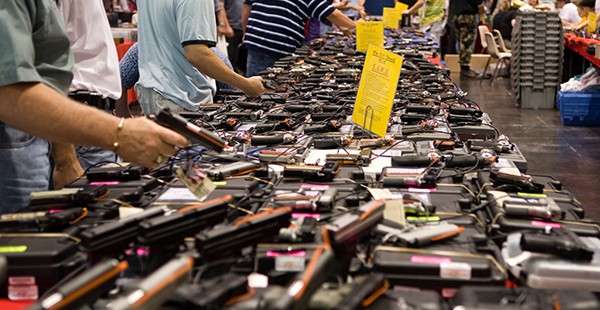 America is a violent place by any standard. The national firearm-related death rate has held steady at 10.5 per 100,000 people since 1999, well above the global average. Some of its cities exhibit epidemic rates of gun death on par with crime-affected urban centers in Latin America and the Caribbean. Hard as it might be to believe, levels of lethal violence are actually at historic lows.

Declines occurred after the passage of specific legislation designed to prevent gun-related deaths. Gun homicides dropped after the passage of the Brady Handgun Violence Prevention Act (1993), the Violent Crime Control and Law Enforcement Act or so-called Assault Weapons Ban (1994), and the FBI’s National Instant Criminal Background Check System (1998). In the absence of significant federal legislation over the past, further reductions in gun violence have stalled.

It is worth putting the United States’ exceptional gun violence problem into perspective. The country´s firearm homicide rate is over six times higher than neighboring Canada’s, and 45 times as high as England’s. With the highest rates of gun homicide, suicide and accidental death in the industrialized world, it is not surprising that Americans also feel afraid.

The percentage of Americans who fear walking alone at night has increased since 2001 to nearly 4 in 10 in 2011. And yet national authorities have consistently refused introducing measures to curb gun violence. Strangely, Congress has opted instead to undermine gun control legislation, curb gun safety awareness, and abandon violence prevention programs, including some that registered positive results.

Meanwhile, in many states, laws intended to promote the responsible use of guns are being repealed. Instead, legislation that reproduces irresponsible firearms use – including so-called “stand your ground” laws – are being pursued. So what explains America’s reversal on gun control?

Concerted efforts to roll back progressive gun regulation began by stealth. They started with quiet lobbying campaigns to reduce American citizens` capacity to diagnose firearm-related violence and thus fully apprehend the magnitude of the problem. In 1996 under considerable pressure from the pro-gun lobby, Congress de-funded firearms-related public health research at the Centers for Disease Control and Prevention (CDC) by 96 percent. To put this in perspective, resources devoted to firearms research constituted just 0.0018 percent of the CDC´s 2013 budget. Given that firearm deaths constitute around 1.3 percent of total national mortality, it could be reasonably argued that the CDC’s gun-related research program should have been roughly 722 times larger.

Meanwhile, the Bureau for Alcohol, Tobacco, Firearms and Explosives (ATF) has been prohibited since 1978 from compiling meaningful data on firearms sales. Moreover, its field offices in states bordering Mexico where illegal arms trafficking is rife are underfunded and understaffed.

More recently, a 2013 Congressional rider stripped the ATF of the authority to compile data on the very gun stores it licenses – data that the authors have made use of to estimate US-Mexico arms trafficking. Making matters worse, the Federal Bureau of Investigation (FBI) is prohibited since 2003 from gathering data for the National Instant Criminal Background Check System (NICS) that it is mandated by law to administer on behalf of gun stores.

Without such detailed data, it is easy to misdiagnose the causes and consequences of gun violence, and therefore mis-prescribe the interventions needed to prevent it. Indeed, many lawmakers have expressed reluctance to pass gun legislation, arguing that they are (purportedly) ineffective. For instance, some pundits have argued that the massive stockpile of firearms in Americans hands renders firearms sales legislation impotent.

The available evidence suggests otherwise. One major public health study found that the risk of homicide in neighborhoods located near a gun retailer was almost 13 times higher than in those situated far from one. Another assessment found that the lapse of the Assault Weapons Ban in 2004 was responsible for a surge in the homicide rate of more than 16.4 percent across the border in Mexico.

Still another scientific article found that homicide rates in Mexican municipalities near California, where a state-level assault weapons ban was still in effect after 2004, rose less than in municipalities near other U.S. border states. A forthcoming study links the lapse of Missouri’s background check law to an annual rise of 60 murders.

It is worth recalling that the stock of guns, like that of any other commodity, depreciates over time and must be replenished to remain at constant levels. The ATF was responsible for overseeing the release of more than 100 million firearms into the market between 1986 and 2011, and will likely be responsible for many more than that in the next 25 years.

Some pundits claim that the true cause of gun violence in the United States has nothing to do with firearms at all. Guns don’t kill people; people kill people, they say. Armed violence is thus traced to other latent factors in American communities and individual psychological dispositions. Among the many reasons mobilized for gun-related violence is the poor state of mental health care.

Observers claim that this was especially the case following the 1972 deinstitutionalization of long-stay psychiatric treatment. Other commonly cited “root causes” include the glorification of violence in popular film, television and video games.

Notwithstanding the undeniable importance of mental healthcare promotion in American public life, they do not offer as much explanatory power as the availability of lethal hardware. Even so, they are often evoked as a diversionary tactic by gun rights supporters and their industry backers. The simple fact is that the plague of gun violence is best tackled through policies addressing it specifically.

There are signs that Americans are waking up to the importance of seriously engaging with national gun policy reform. Over half of Americans are now dissatisfied with gun laws and policies, the highest ratio in over a decade. Of those, Americans calling for tighter gun legislation outnumber those in favor of loosening regulation by 2 to 1. It is possible that these changes in attitude are linked to tragic media stories recounting weekly mass shootings.

There have been 28 such incidents since the Newtown shooting in 2012. Likewise, Americans are also alarmed about the ways in which firearms are being sold in the United States to traffickers who are fuelling violence Mexico and Central America. Although the Obama Administration has failed to convince Congress to pass new firearm legislation in its two terms, some limited progress is being made. For example, the President appointed Todd Jones as Director of ATF in 2013, a position that had remained vacant for six years.

He also initiated a series of smaller targeted gun control initiatives. The National Institutes of Health have recently deployed new funding mechanisms for research on firearms as they relate to children’s health. What is more, President Obama’s pick for the next Surgeon General, Vivek Hallegere Murthy, has publicly advocated for greater attention to gun control, especially since the 2012 Newtown school shooting. But even Murthy has rejected the possibility of using the Surgeon General’s office as a “bully pulpit” for gun control.

The reluctance of politicians to tackle gun violence can be ascribed principally to the relentless lobbying efforts of the National Rifle Association (NRA). Simply put, governors, senators and congressmen fear incurring the wrath of the NRA and firearms industry representatives. It is for good reason that the NRA is consistently named one of the most influential lobby groups in Washington, alongside powerhouses such as the American Israel Public Affairs Committee (AIPAC) and the American Association of Retired Persons (AARP).

In addition to swaying political votes, the NRA has also successfully turned public opinion dramatically over the past three decades. Discussions around gun ownership in the United States have gradually shifted from one associated with “responsibilities” of gun possession to one uniquely emphasizing the “rights” of firearms ownership. While 60 percent of Americans favored a handgun ban in 1959, just 26 percent were similarly inclined in 2011.

It is no secret that the NRA is heavily supported by contributions from a rejuvenated gun industry. With around 300 manufacturers representing $6 billion in revenue, America´s gun-makers have had every reason to contribute liberally to the lobby group´s coffers – over $76 million in 2009 alone. And they garner support from small and medium-sized gun sellers as well.

There are some 54,000 licensed dealers and the industry as a whole may employ as many as 100,000 Americans. The NRA has also successfully consolidated its base. Describing President Obama as the most significant threat to gun owners in generations, the NRA has reaped a veritable bonanza of financial support. The NRA’s revenues doubled in 2007 and allowed the organization to boost expenditures from 2006 to 2010 by 37 percent.

By 2012, the NRA’s revenues swelled to $256 million and include three individuals giving $3 million or more and another 15 donors writing checks of between $100,000 and $1 million. And since the NRA is a non-profit, the entity is not required to name its donors.

While citizens bear the costs, it is ultimately the manufacturers, retailers, and marketers that profit from the country´s tsunami of gun violence. What do the numbers tell us? Some 32,163 Americans died of gunshot wounds in 2011. Another 70,000 more were non-fatally injured in the same year, and suffer debilitating physical and psychological scars. The economic cost of those losses has been estimated at $47 billion annually.

This grossly exceeds the industry’s economic benefit, as (generously) calculated by the National Shooting Sports Federation, by some $18 billion per year. Moreover, from 2006-2013, up to 120,000 Mexicans were murdered, roughly 50 percent of them by guns.

If we assume that the ATF’s sample of illegal firearms seized in Mexico, 68 percent of which were traced to sales in the United States, is representative of the country’s total holdings, we might say that roughly 3,700 Mexicans are intentionally killed by Americans guns annually. A back-of-the-envelope calculation using Mexico’s current per capita GDP of $11,000 implies an additional $1.5 billion in lifetime lost income in that country alone. While these are rough estimates they make a sharp point: the beneficiaries of the industry have a voice in Washington; the losers, for the most part, do not.