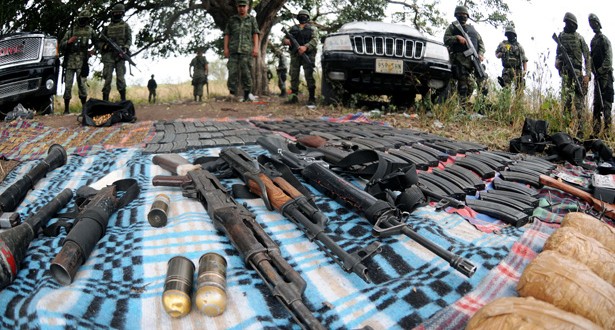 Despite Mexico’s tough legal restrictions, the ratio of killings committed with firearms has skyrocketed. Here’s why.

As many as 120,000 people in Mexico have been murdered since 2006, many from a bullet to the back of the head. Most of these killings are committed not with assault rifles, but rather pistols and revolvers. Many are perpetrated by hit-men tied to narco-cartels, but some occur in confrontations with soldiers and police. What’s more, the majority of guns causing mayhem on Mexico’s streets are made in the United States. And for all their destructive power, no one seems to know just how many firearms are flowing into the country.

Mexico can hardly be described as a heavily armed society. With around 2.5 million registered gun owners and at least 13 million more illegal arms in circulation, the country has a ratio of just 15 guns for every 100 people, well below the global average. Unlike in the U.S., civilian possession in Mexico is considered a privilege, not a right and is tightly regulated under federal law since the 1970s. Extensive background checks are required of all purchasers, and there are heavy penalties and even imprisonment for non-compliance. Astonishingly, there is just one legal gun shop in the country, compared to more than 54,000 federally licensed firearm dealers and thousands of pawnshops and gun shows scattered across the U.S.

Yet in spite of tough gun laws in Mexico, the proportion of killings committed with firearms skyrocketed from around 20 percent in the mid-1990s to 50 percent in the past few years. What explains the sudden rise in gun violence?

A big part of the problem resides not in Mexico, but in the U.S. In an economic study conducted by the University of San Diego’s Trans-Border Institute and the Brazil-based Igarapé Institute, we estimated the volume of firearms annually trafficked across the US-Mexico border. Drawing on data from the Bureau for Alcohol, Tobacco, Firearms and Explosives, we hypothesized that if the volume of the trade was significant, it would contribute to the total demand for firearms (and retailers) near the U.S.-Mexico border.

We conservatively estimate that about 2.2 percent of total demand for U.S.-sold firearms originated south of the border between 2010 and 2012. These weapons are often bought in the U.S. through “straw man” purchases, who acquire arms on behalf of others with the intention of being trafficked to Mexico. This translates into at least $127 million dollars in revenue for gun retailers and weapons manufacturers who are literally making a killing. More importantly, it is the equivalent of an annual average of 252,000 guns crossing the border, far above previous estimates based on seizure data. In other words, the roughly 37,000 guns seized at the border by U.S. and Mexican authorities in 2009 probably represents less than 15 per cent of total traffic.

What this means is that the U.S. is a significant, albeit unintentional, contributor to the global black market in arms and ammunition in Mexico. One of the reasons for this is the sheer scale of production in the US. Mexico has a relatively small production capacity for firearms and ammunition and virtually no exports. According to economist Jurgen Brauer, however, U.S.-based firearms manufacturers produced more than 98 million handguns and shotguns for domestic sale since the mid-1980s. This amounts to more than 4 million guns per year.

Our study demonstrates that the U.S. is negligent in preventing illegal gun trafficking. Mexico’s legislature recently called on the U.S. to introduce gun registries in southern states. Mexican police have also confiscated tens of thousands more firearms crossing the border than their American counterparts. In other words, they are trying to do their part. If the U.S. is going to get serious about stopping the havoc south of the border, it needs to invest in responsible gun control at home.

In the wake of the spate of mass shootings in the U.S., there are signs that reason might yet might prevail. Vice President Biden proposed the criminalization of straw purchases, which is a step in the right direction. But smarter solutions are also necessary. At a minimum, robust background checks are needed to scan for likely straw purchaser “profiles.” Cash transactions for gun purchases along the border could also be prohibited. Likewise, detailed data on domestic arms sales is needed in order to detect suspicious purchases. Since conservative U.S. politicians are reluctant to create a border states gun registry, they could instead help the Mexican government establish their own database of seized weapons so they stand a fighting chance of tracking errant US dealers.

In his first major speech as Secretary of State, John Kerry noted how “[i]n today’s global world there is no longer anything foreign about foreign policy.” The other side of the coin is equally true: There is no longer anything domestic about domestic policy. With last week’s announcement of a bipartisan deal outlawing straw purchasing of firearms, as well as their traffic out of the U.S., there are signs that change is possible. But they should not stop there if the violence is to be brought under control.